When in Paris you should always visit the Christian Dior boutique at  avenue Montaigne and the new boutique  127 Av. des Champs-Élysées.

Dior for me is the obsession I have in my life.I adore the house of Dior.The history of the house and how all started..If you read his biography you will understood..But as you came across my website let me tell you some info…

Who Was Christian Dior?

Legendary fashion designer Christian Dior exploded onto the Paris fashion scene with designs that flew in the face of wartime restrictions and reintroduced a femininity and focus on luxury to women’s fashion. His resulting success, based on the innovation of both his designs and his business practices, made him the most successful fashion designer in the world. His designs have been worn by film stars and royalty alike, and his company continues to operate at the forefront of the fashion industry.

Dior credited a five-pointed gold star with his decision to found the House of Dior. As he painstakingly deliberated over whether or not to leave his position at Lucien Lelong (where he worked as a designer alongside Pierre Balmain), he chanced upon a star lying on the Rue Saint-Honoré where it had fallen from a carriage – right on the spot where he had met a friend who suggested he speak with an investor about joining another house. 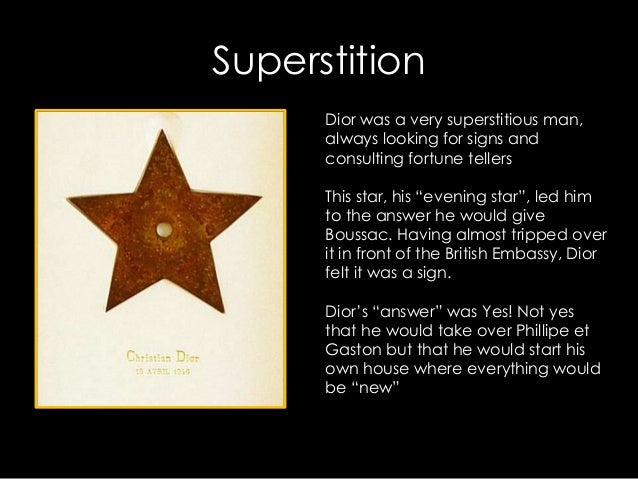 He took it as a sign from divine providence, met with the financier, and told him that he would start a house of his own “where everything would be new, from the state of mind and the staff to the furniture and premises”. He kept his lucky star with him at his atelier for the rest of his career.(vogue)

And I couldn’t not to love this iconic house of Dior..It’s my favorite brand and I think you know that.I wish to work with Dior one day and I believe that if you think positive and work hard everything could happen..(I’m writing and listening Christmas songs and it’s so magical to write about Dior while listening of this magical sounds) It makes me to believe that fairytales do exists in life and if you add some stardust..life will be more beautiful..have faith and go for your dreams my loves..miracles always happen…